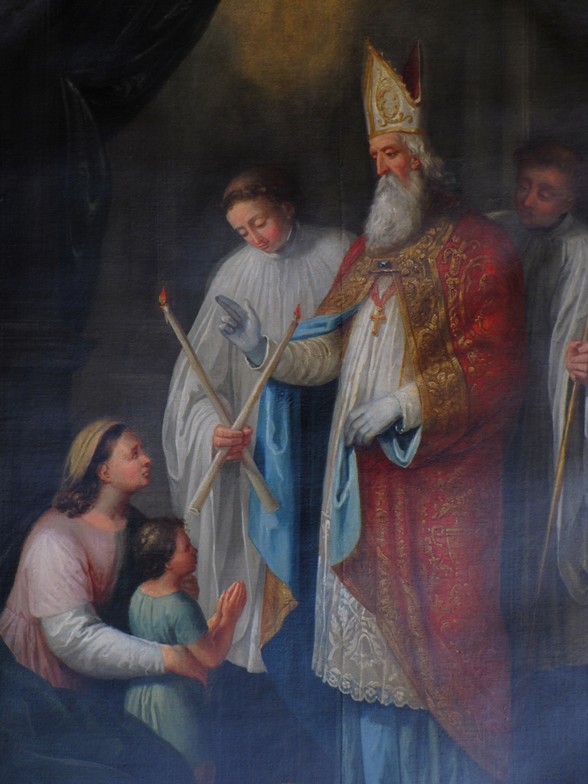 Through the intercession of Saint Blaise, bishop and martyr,
May God deliver you from every disease of the throat and from every other illness.
In the name of the Father, and of the Son, and of the Holy Spirit.

Article 1625 from The Book of Blessings contains a brief historical background of the blessing of throats:

Saint Blaise was the bishop of Sebaste in Armenia during the fourth century. Very little is known about his life. According to various accounts… he was a physician before becoming a bishop. His cult spread throughout the entire Church in the Middle Ages because he was reputed to have miraculously cured a little boy who nearly died because of a fishbone in his throat. From the eighth century he has been invoked on behalf of the sick, especially those afflicted with illnesses of the throat.

The use of candles for the blessing of throats stems from the candles that Blaise used while in prison. When an old woman’s pig had been miraculously rescued from a wolf by Saint Blaise, she would visit him in prison, bringing him food and candles to bring him light in his dark cell.

Articles 1626 and 1627 explain when and how the blessing takes place:

The blessing of throats may be given by a priest, deacon, or a lay minister who follows the rites and prayers designated for a lay minister. If the blessing is conferred during Mass, the blessing follows the homily and general intercessions, or, for pastoral reasons, the prayer of blessing may take the place of the final blessing of the Mass. When the blessing is given outside Mass, it is preceded by a brief celebration of the word of God. If the blessing is to be celebrated at Morning Prayer or Evening Prayer, it is given after the reading and responsory (and homily) and before the gospel canticle. The blessing may be given by touching the throat of each person with two candles blessed on the feast of the Presentation of the Lord (February 2) and which have been joined together in the form of a cross.

If all cannot be blessed individually, the celebrant, without candles, extends his hands over the assembly and says the prayer of blessing.